Revenge of the Girl with the Great Personality - Review 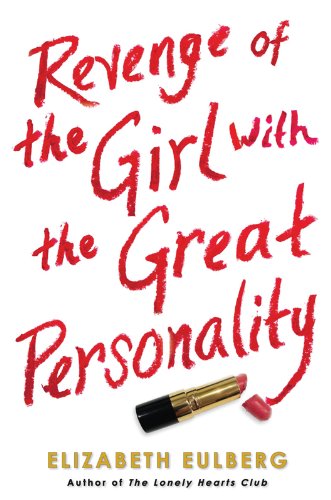 Revenge of the Girl with the Great Personality by Elizabeth Eulberg

Grade Level: 7 and up

A hilarious new novel from Elizabeth Eulberg about taking the wall out of the wallflower so she can bloom.

Don't mess with a girl with a Great Personality.

Everybody loves Lexi. She's popular, smart, funny...but she's never been one of those girls, the pretty ones who get all the attention from guys. And on top of that, her seven-year-old sister, Mackenzie, is a terror in a tiara, and part of a pageant scene where she gets praised for her beauty (with the help of fake hair and tons of makeup).

The time has come for Lexi to step out from the sidelines. Girls without great personalities aren't going to know what hit them. Because Lexi's going to play the beauty game - and she's in it to win it.

Elizabeth Eulberg was born and raised in Wisconsin before heading off to college at Syracuse University and making a career in the New York City book biz. Now a full-time writer, she is the author of The Lonely Hearts Club, Prom & Prejudice, Take a Bow, and Revenge of the Girl with the Great Personality. She lives outside of Manhattan with her three guitars, two keyboards, and one drumstick.

I thought this book was going to be funny, so I picked it up while I was in the mood for something humorous. Initially I was disappointed that it wasn't a laugh out loud type of book, especially since the blurb claims it is "hilarious", but it was still very entertaining.

Lexi is a sweet girl with a great personality, but she is tired of being stuck in the friend zone. Eventually, she accepts a friend's challenge to put more effort into her appearance. She then has to start navigating the tricky world of boys, jealous baby sisters, and insecure popular girls. The story itself is interesting, and the inclusion of beauty pageants and the behind-the-scenes look at the pageant families adds something fresh to an otherwise formulaic plot.

My biggest gripe with the story is Logan. This is a bit of a spoiler, so don't read this if you don't want to know anything. All through the book, Logan comes across as sweet, caring, and sincere. He is desperately clinging on to the last shreds of his relationship with his girlfriend, and he is super nice to Lexi. As soon as he and Lexi go out, he suddenly turns into a jerk. I just didn't find the way that whole thing played out to be very believable. I did love Taylor and I thought he was a great addition to the story. He was a good example of how a boy should treat a girl. I am interested to see if this will turn into a series.

Disclaimer: I received a free copy of this book in exchange for an honest review.
Pin It
Posted by Unknown at 10:30 AM