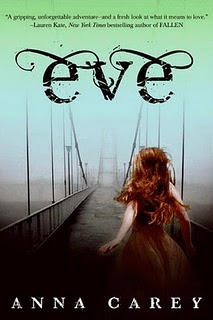 From Goodreads: The year is 2032, sixteen years after a deadly virus—and the vaccine intended to protect against it—wiped out most of the earth’s population. The night before eighteen-year-old Eve’s graduation from her all-girls school she discovers what really happens to new graduates, and the horrifying fate that awaits her.

Fleeing the only home she’s ever known, Eve sets off on a long, treacherous journey, searching for a place she can survive. Along the way she encounters Caleb, a rough, rebellious boy living in the wild. Separated from men her whole life, Eve has been taught to fear them, but Caleb slowly wins her trust...and her heart. He promises to protect her, but when soldiers begin hunting them, Eve must choose between true love and her life.
**
As far as the-world-has-been-wiped-out-by-a-deadly-virus dystopians go, this was very well done. I was constantly intrigued and usually very stressed out by the action. I love it when a book forces me to take a breath and say, “This isn’t real…”
Eve is smart, so it completely frustrates her when she realizes she doesn’t understand something or what she thought she knew is wrong. I really like that about her.
Caleb was a perfect love interest. He is strong, funny, protective and smart, but he also has a stubborn streak.
There were a few things about Eve that I disliked or that confused me, but they were very minor.
In all, I really enjoyed Eve, but I am anxiously awaiting a sequel to tell me why on earth Eve did what she did at the end of the novel. There had better be a good reason, or I am going to be furious with her.
Pin It
Posted by Deborah A. at 9:39 AM